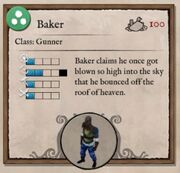 An example of a crew member, showing the crewman's name, cost, class and skill at navigation, reloading, repair, and melee combat. 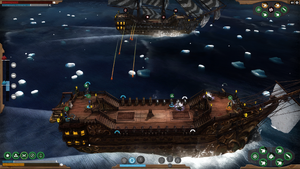 The crew, manning its positions.

Your crew is everyone you need to defend against other ships and ensure yours stay afloat. Each crew member comes with a randomly generated skin colour, bio and name. The name is either generated from the default list or the newsletter subscribers. You can rename crew if you wish.

Customization options are planned for Early Access, so that you can choose things like your Captain's skin color and gender (only male captain is implemented as of combat demo).

While you can gain crew as a reward from quests or events, you will predominantly recruit them from a Tavern when you visit a Port.

Sometimes you will come across crew that have extra skills beyond the default values, often in their non-specialist area. Naturally, these veterans of the sea are more expensive to hire than their more rookie colleagues.

Although the Captain represents the player, all crew members are controlled directly by the player. The Captain is adept at all standard tasks, and so starts at level 2 for melee, navigation, repair and reloading skills. The captain can also reach level 5 in each of these skills. The captain is not capable of healing other crew, which is a surgeon-only skill.

As long as the Captain is alive, there is always hope: even if your ship is destroyed, you have a chance at survival either by lifeboat, or stranded alone in the water.

Safeguards are in place so that the Captain can never be unfairly killed, prematurely ending the game. Being brought to zero health puts a Captain in an unconscious state (as opposed to other crew members who will die if not stabilized in time). This means that the Captain will either recover after battle if your ship survived, or will end up stranded if your ship was destroyed.

Marines are hired swords. They are professional fighters who pride themselves on combat prowess, and continually practice their swordsmanship to ensure peak, lethal performance when called upon.

Marines are most effective at melee combat when boarding the enemy, or when repelling enemy boarders.

A gunner is a well-oiled machine when it comes to cannon reloading, although it can be morbid work. Life seems cheap when you continually see the explosive effects of your skills on an enemy crew.

Gunners begin with proficiency in weapon reloading. Assigning them to your weapons will reload them faster versus using other crew members.

Although navigators tend to be the more studious members of a crew, they are well respected. The entire crew's life is in a navigator's hands when piloting through treacherous waters or a sudden storm.

When a navigator is manning the wheel, your Manoeuvre Bar will recharge faster, allowing you to ram, flee of turn the ship around sooner.

It is easy to dismiss the sailor as a generic crew member, but their excellence in ship maintenance is a valuable asset.

Sailors are able to repair damage to the ship faster than other crew members. Making sure it's your sailor who repairs damage will get you fighting fit again at the fastest possible rate.

Surgeons are used to making tough decisions, fast. If they need to take a man’s limb to save their life, they will do so without hesitation, remorse, and often without even a rope for them to bite down on.

Because Surgeons are the only class able to heal crew outside of the Sick Bay, other crew members can carry on with their duties in the meantime. This means the Gunner can still reload and get off that vital shot without having to run off to the Sick Bay to heal themselves.