Points of interest are randomly placed within regions on the world map, according to the whims of procedural generations. These waypoints serve as hubs for quests, repairing your ship, picking up crew, and more. 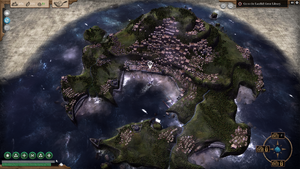 Ports serve as stop-over points. Each port allows you to:

Note that ports will give you a discount on all purchases if there is a pirate nearby. Sinking his ship will net a 10% discount, while capturing it whole will yield a 15% one. Pirate ships are distinguished on the world map by a red circle and the skull-and-crossbones symbol overhead.

There are numerous ships you can run into, each with its own set of opportunities.

This article is a stub. You can help Abandon Ship Wiki by expanding it.